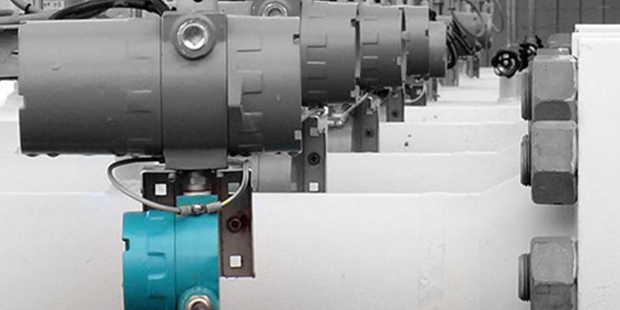 Flexim is an innovative manufacturer of Ultrasonic Clamp-On Flow Measurement devices and Processanaylsers. With their leading edge technologies they are strongly growing internationally.

With their innovative ultrasonic flow measurement technology Flexim offers the chemical, fertilizer, Oil & Gas, Water, Power and Thermal Energy and BTU metering industry only the best of the best in flowmeters, process analytics and services.

Many successful companies have small beginnings. Garage based start-ups are legendary. FLEXIM is no exception. The company, which by now is well established as a world renown manufacturer of measurement instrumentation, had its beginnings in the spring of 1990 as a risky endeavor in a rented apartment located in Berlin’s Friedrichshain district.

Listening to what’s coming down the pipeline…

The situation in 1989 and 1990 was fluid in more ways than one. Angry demonstrators roamed the streets of Berlin, Leipzig and other major East German cities. With the fall of the Berlin wall a radically new world was opened with new possibilities and risks. Four graduates of Berlin’s Humboldt University and the University of Rostock discovered their entrepreneurial spirit. They decided to try their luck and apply their knowledge: On February 17th, 1990 they founded FLEXIM GmbH. The declared purpose of the company was the development and manufacture of ultrasonic flow instrumentation.

Top technology in the backyard

Today non-intrusive flow measurement is a well known and widely used technology. 20 years ago things were very different. Few of FLEXIM’s neighbours could have known at the time that world-class R&D was being conducted in the apartment next door. The business aspects of the new company were understood poorly. After all the founders did not grow up thinking in business concepts. Luckily this deficiency was more than made up by the subject matter at hand : ultrasonic flow measurement. This know-how came from Rostock University. Two of the company founders had studied ultrasonic flow measurement under flow guru Prof. Dr. Otto Fiedler. Under his guidance they had developed the first ultrasonic flow meter prototypes.

From a Berlin living room to the top of the world

Right from the beginning the aim was set high: FLEXIM was to be a top-rated global player in its field. After 18 months of hard work the stage was set. The instrument developed was ready for prime time and the first model moved into production. During the 1991 Hannover fair the first unit was sold to a customer for use in Nepal. In spite of this rather high first installation FLEXIM has been moving up ever since. Model FLUXUS® ADM 6402 became a “benchmark” product even before this word entered the business world lingo.

Research with progress in mind

Who would know better and first hand that one cannot rest on one’s laurels: FLEXIM was created in turbulent and changing times. FLEXIM’s owners understand that change is inevitable. This explains the company’s policy of investing above average sums in R&D in order to maintain the role of the technological leader. The envelope for ultra sound measurement applications was steadily expanded. Today FLEXIM leads the way in high temperature and gas flow measurement. The technology is now also used for process analysis applications such as non-intrusive concentration measurement.

In 2002 FLEXIM embarked on a new venture. FLEXIM products not only listen what is going on inside a pipe. They now look into the pipe as well. This is done with FLEXIM’s PIOX® refractometer series. Refractometers originated with Carl Zeiss in Jena, Germany. Back in 1872 Ernst Abbe manufactured the first critical-angle refractometer in Jena. PIOX® refractometers are the result of a cooperative agreement between FLEXIM and the Godat company which had grown out of the Carl Zeiss company. Godat contributed its refractometer expertise, FLEXIM the electronic signal processing portion to the new venture – today, the PIOX R Refractometer belongs to the most developed Processrefractometers worldwide and is widely used in many industries.

We are proud to announce that Flexim Instruments Benelux B.V. has chosen FertilizerRecuitment as partner for HR Services / Recruitment activities!