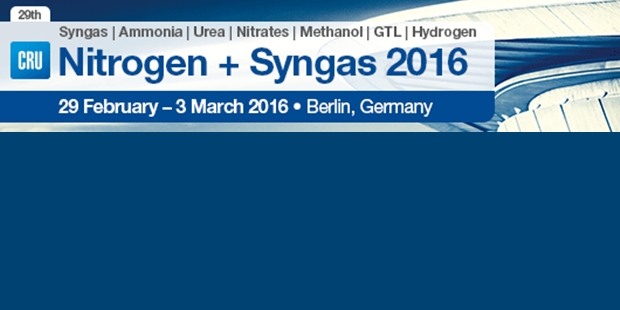 Whether you are investing in a new plant, revamping an existing plant, or maintaining your plant to achieve optimal production, safety and environmental performance, Nitrogen + Syngas is the must attend event. Make sure that you put the dates in your diary and join the other producers, licensors and service providers who will be attending Nitrogen + Syngas 2016 on 29 February – 3 March in Berlin.

The global nitrogen market has taken a negative turn and prices have fallen to global cost floor set by Chinese urea producers. The cause of this? A decade of high nitrogen prices and a central bank-induced era of cheap capital combined to create a nitrogen investment boom. The dramatic expansion of capacity that followed has oversupplied the market and depressed prices. And with the US building boom that started in 2012 finally being realised later this year as CF Industries commences urea production at its Donaldsonville expansion in Louisiana, capacity will continue to cast a long shadow over global nitrogen markets.

However, it is not all doom and gloom. Nitrogen producers in the USA, Europe and Russia are all enjoying an enviable bout of production cost deflation, as collapsed oil prices feed through into natural gas markets. CRU estimates that these cuts in production costs are amounting to a 15-20% saving in Europe and the US over-production costs last year. And a whopping 30% saving in Russia, where the weak rouble has provided a remarkable boost to competitiveness!

Further uncertainty is gathering on the horizon. Economic output from the emerging markets that have driven nitrogen consumption growth – and prices – over the last decade is slowing. And the market is now waiting to see what the decelerating Chinese and Indian economies, as well as recessions in Russia and Brazil, have in store for nitrogen demand in 2016.

As global nitrogen markets move into a state of oversupply, it is now more important than ever for producers to stay informed about the latest market developments that are impacting worldwide production. And, in current market conditions, updates on new technological developments that improve the efficiency and safe operation of nitrogen and syngas plants are crucial.

Nitrogen + Syngas is firmly established as the premier industry event for the nitrogen market, having been an annual opportunity for the industry to meet, learn and network for nearly three decades. Now in its 29th year, the conference explores the impacts of key market trends, feedstock outlooks, project updates and supply and demand forecasts throughout the commercial programme, with presentations from respected industry figures, and high level analysis from CRU’s Nitrogen team.